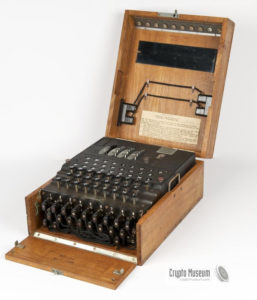 Enigma M4 was an electromechanical cipher machine, developed during WWII, for use by certain divisions of the Kriegsmarine (German Navy) — in particular for the U-Boats. It was intended as a more secure version of the Enigma M3, which was based on the German Army Enigma I. The M4 played a pivoting role in the Battle of the Atlantic and was introduced unexpected on 2 February 1942, causing great upset with the allied codebreakers at Bletchley Park (BP), where its traffic was known as SHARK. It remained unbroken for nine months until new key sheets were captured.

The Kriegsmarine procedures on sending messages with the Enigma cipher machine were far more complex and elaborate than the Wehrmacht and Luftwaffe procedures. Of course, secure communications were a most vital part of the supremacy of the Kriegsmarine in the Atlantic. The U-boats relied completely on secure communications to receive their orders, coordinate patrolling on sea, and their Wolfpack tactics. If the communications were compromised, this would reveal Germans naval positions and result in Allied tactical countermeasures or active hunt on the U-boats.

During the War, several different Kurzsignale methods were used on U-boats. Until 1942, Alpha signals were used. An Alpha signal was a small message, usually containing a single four-letter group. From 1942 on, U-boats commonly used the Beta signals. Various editions of Kurzsignalhefte, the Short Signal Codebooks, were applied during the war. Each Kurzsignal message, or Beta signal, had a strict format, containing an introduction, an identification to the key, and the message, encrypted with the Enigma cipher machine.