Fiat 666 NM – The Fiat 666 was a heavy truck produced by the Italian Fiat Veicoli Industriali. The 666, like the corresponding medium-sized Fiat 626, was produced from 1940 as “Unified” truck: since 1937, by law, the War Department required all manufacturers of civilian trucks to have standard features regarding weight, number of axles, speed and capacity, in order to simplify logistics in case of requisition by the armed forces. The 626 and the 666, which replaced on assembly lines, respectively, the Fiat 621 and Fiat 632, were the first trucks of the Turin with forward control, and with the engine totally contained inside the cabin. 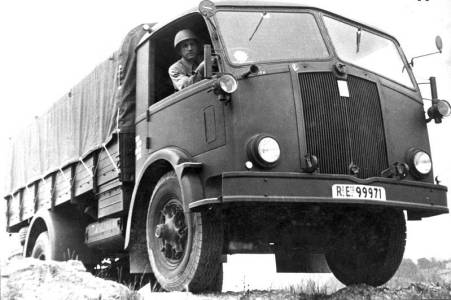 The chassis was made of longitudinal members on two axels, with front-wheel steering and twin rear-wheel drive, a wheelbase and track width of 3.85 meters by 1.84 meters. The truck had a Fiat 366, 6-cylinder 9365 cc, diesel engine, which developed 105 hp at 2000 rpm and was characterized by the innovative layout of guides that allowed a quick and simple replacement from the front. The gearbox had 4 forward speeds and one reverse with reduction gearing. Externally, it differed from the Fiat 626 only in size, the shape of the windscreen and the body. The trailers, with 6260 kg capacity (twice the 626), could carry 20 equipped soldiers.The vehicle was produced from 1940 to 1945 in civil and NM (Nafta Military) 666N diesel versions (nafta) for the armed forces. In 1943, the BM version gasoline was approved for military use, but the armistice prevented production.The civilian version, also available with a bus chassis, had enormous success, also being produced after the war as the Fiat 666N7, for a total production of 8000.The Fiat 666 is largely acquired by the Italian armed forces: the N-RE version for the Royal Italian Army and the N-RA for the Royal Italian Air Force were captured in different outfits, such as the Bus, Car, Tanker, Fire Engine, Transport quadrupeds, with portacarri trailers Viberti and Bartoletti. After the Armistice of Cassibile are produced 79 NM for the Germans who occupied the Fiat facilities in north Italy. Among the units supplied to the forces of the Italian Social Republic, there is evidence of at least one 666 armored handcrafted from the arsenal of Piacenza, with turret armed with a 12.7 mm Breda-SAFAT machine gun and supplied to the Republican National Guard.

Ansaldo Fiat L6/40 – The L6/40 was a light tank used by the Italian army from 1940 through World War II It was designed by Ansaldo as an export product, and was adopted by the Italian Army when officials learned of the design and expressed interest.  It was the main tank employed by the Italian forces fighting on the Eastern Front alongside the L6/40-based Semovente 47/32 self-propelled gun. L6/40s were also used in the North African campaign.The official Italian designation was Carro Armato (“armored vehicle”, i.e. “tank”) L6/40. This designation means: “L” for Leggero (“light”), followed by the weight in tons and the year of adoption.The L6/40 was a conventional light tank design of riveted construction. A one-man turret in the centre mounted a single Breda Modello 35 20 mm main gun and a Breda 38 8 mm coaxial machine gun.  The driver sat in the front right of the hull. The riveted armour was six to 40 mm in thickness, which was roughly equivalent to existing Allied light tanks.