Starting from 1980, the supply of new INBUS cars begins, produced by a consortium that brings together Breda Costruzioni Ferroviarie of Pistoia, De Simon of Osoppo (Udine), SICCAR of Vittorio Veneto (Treviso) and SOFER of Pozzuoli (Naples). The INBUS U210 is the first car produced in Italy according to the scheme just introduced on other models of the time, with a 12-meter chassis and the presence of a double central door. A first group, made up of 109 cars with bodywork from Breda (400-508), entered service between May 1980 and March 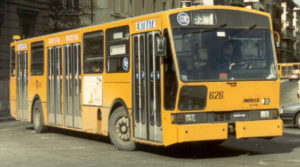 1981: the engine is the Fiat 8200.13.618 of horizontal type, arranged in a rear position, with six cylinders from 10308 cm3, which develops 208 HP at 2500 rpm; the gearbox is the Voith-Diwa D851 with three forward and reverse gears, with hydraulic converter, electric control via the accelerator and brake pedals and keyboard for entering the individual ratios. With the new buses, a parking brake actuation device also appears: from the hand lever placed on the floor, which clamps the rear wheels with mechanical shoe actuation, we now switch to a pneumatic brake powered by a separate reservoir, held constantly under pressure for the simultaneous emergency brake function.

The first generation of Solaris Urbino 18 was produced from the second half of 1999. This model was intended to complement Solaris’ offer on large buses: 18-meter buses for public transport services. The first Solaris Urbino 18 bus unit went to PKA Gdynia in 1999, it was also the only new high-floor articulated joint purchased in 1999 from transport companies in Poland. Initially, 18-meter buses did not sell well because transport companies preferred 15-meter vehicles, which were slightly shorter, non-articulated and cheaper. 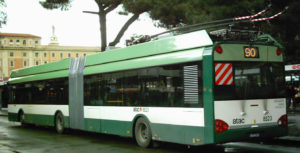 The bus market grew between 1996 and 2002, which resulted in a subsequent increase in demand for 18-meter buses. Overall, Polish cities have purchased 12 Solaris Urbino 18 I regeneration units. Solaris Urbino 18s were also bought by companies outside of Poland, for example in Berlin and Riga. A feature of these buses are the painted barriers instead of the clear varnished yellow paint.

A major order from MZA Warsaw in 2005 resulted in a significant increase in the sale of the Solaris Urbino 18 in Poland.

In December 2006, Olsztyn was the first Polish city to receive 8 units of the Solaris Urbino 18 model compliant with the Euro 5 standard, which became mandatory for new vehicles in 2009.

(All notes from wiki)