Public transportation system of the city of Santiago, capital of Chile

The so-called New Collective Locomotion Bidding System, popularly known as the “micros amarillas”, was the public transportation system of the city of Santiago, capital of Chile, launched in 1991 and finally replaced by the Transantiago on 2007.

Until 1990, public transport in Santiago had no control over the number of minibuses for route, or in the antiquity that many had, neither in the high tariffs for the user and there was no regulation limiting the gases emitted by the buses, which ended up generating high pollution.

In 1991 the Ministry of Transport begins a series of changes and measures, whose objective was to order public transportation.

Progressively, the buses were painted according to the rules (passing from a mixture of colors, to white-yellow uniformity), which also required that on the side where the doors and windows were painted the number of the service, and in the itinerary of the front, the number next to the origin and destination of the route. 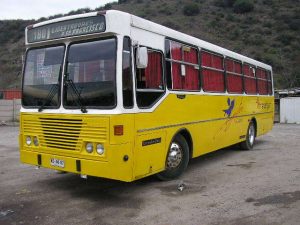 Industrias Metalúrgicas Paredes S.A. (better known by its acronym Metalpar) is a Chilean company dedicated to the import and bodywork of buses.

Our paper model depicts the bus in service on line 180 from Avenida Los Libertadores to Pqe. San Francisco.