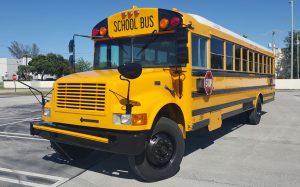 The 3800 is notable for being the first American school bus chassis to have an engine lineup consisting only of diesel engines.