The first product model incorporates (with a slight increase in power) the 680 engine, ie a 6-cylinder 10.170-liter engine and 122-mm piston bore, and is therefore called Fiat 682 “122”. The chassis, cab, gearbox and differential are new designs.

At the time of the debut there is only one version: 4×2 truck with a 3.8 meter wheelbase.

The range is 14t, as required by the new Italian highway code. Then the Fiat 682T will arrive, a 4×2 road tractor with a 3.3 m wheelbase. 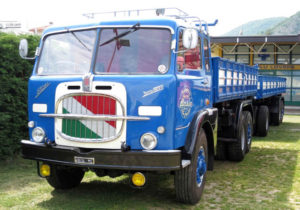 All 682 will be produced by the parent company only in the 4×2 version (four wheels, of which two are tractors), but many examples will be transformed by external firms into 6×2 with the addition of a third rear axle. Unfortunately this first version of the 682 N denotes many defects, it does not correspond to the same reliability and power of its predecessor 680n with the same displacement and 4 valves per cylinder. The new head only 2 valves per cylinder, bushings and other details make it an engine more fragile than the competition (in particular Lancia Esatau).

After only one year, in 1953, the 122 was replaced by the “125” (also in this case it took the name from the 125 mm of the bore of the pistons). The aesthetic differences between the 122 and the 125 were minimal: the windshield wipers in 122 came out of the split windshield, while in 125 they left the roof of the cabin. Furthermore in the 125 two air intakes were obtained with the door closing in the front part. 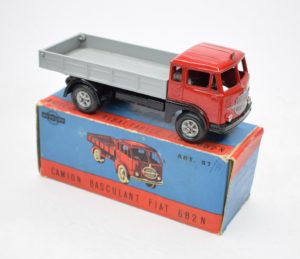 From a mechanical point of view the whole engine was revised and finally the reliability and durability that will characterize it was reached. This model of the 125 will also be marketed in Mexico by DINA, together with other Fiat-produced vehicles and by applying to the 203.045 a Roots-type volumetric compressor born for industrial and marine engines of 160 hp. 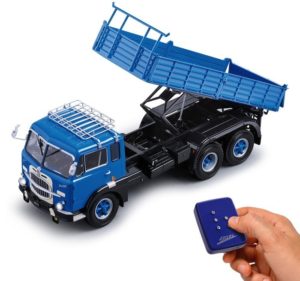 In 1955 the N2 was slightly revised: power increased to 152 hp and power steering was introduced. In 1959 there is a more important update: the doors open from wind bracing (with a zip at the back) to windproof (with a zip at the front); with the occasion the descending windows are also introduced, replacing the previous sliding windows.

Since 1967 the production continues, both in Italy and in several African states, without major updates. The last Fiat 682 came out of the assembly lines in 1988, more than 35 years after the birth of the model [all from Wikipedya].

Note for model collector: the most famous diecast model is certainly the one produced by the Italian firm Mercury in the fifties ( 1/43 and 1/25 scale) , in recent times the truck has been reproduced in all the series on many scales from many companies: Brekina (ho scale),IXO (1/43), Gila modelli, CB model (1/43 resin kit) and recently on Kiosk version with the collection “Build the FIAT 682 Truck” proposed by Hachette in 1/14 big scale.