The Fiat Panda is a front- and all-wheel-drive, five-passenger city car manufactured and marketed by Fiat, now in its third generation.

The second generation (Mk3), launched in 2003 as a 5-door hatchback, was designed by Giuliano Biasio of Bertone, and won the European Car of the Year in 2004. 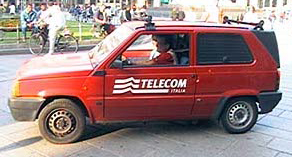 The third generation (Mk4) Panda debuted at the Frankfurt Motor Show in September 2011, was designed at Fiat Centro Stilo under the direction of Roberto Giolito and remains in production in Italy at Pomigliano d’Arco.

In 40 years Panda production has reached over 7.8 million, of those, approximately 4.5 million were the first generation.

In early 2020, its 23-year production was counted as the twenty-ninth most long-lived single generation car in history by Autocar magazine.

(All notes by Wiki)