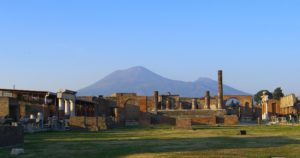 Pompei was an ancient city located in what is now the comune of Pompei near Naples in the Campania region of Italy. Pompei was buried under 4 to 6 m (13 to 20 ft) of volcanic ash and pumice in the eruption of Mount Vesuvius (Vesuvio) in AD 79.

Largely preserved under the ash, the excavated city offered a unique snapshot of Roman life, frozen at the moment it was buried, and an extraordinarily detailed insight into the everyday life of its inhabitants, although much of the evidence was lost in the early excavations. It was a wealthy town, enjoying many fine public buildings and luxurious private houses with lavish decorations, furnishings and works of art which were the main attractions for the early excavators. Organic remains, including wooden objects and human bodies, were entombed in the ash. Over time, they decayed, leaving voids which archaeologists found could be used as moulds to make plaster casts of unique figures in their final moments of life. 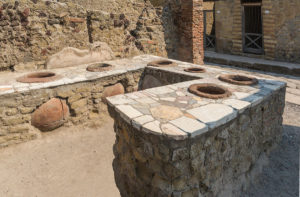 Thermopolium In the ancient Greco-Roman world, a thermopolium, literally “a place where (something) hot is sold”, was a commercial establishment where it was possible to purchase ready-to-eat food.

Thermopolia being the forerunners of today’s restaurant, the items served are sometimes compared to modern fast food. These places were mainly used by those who simply could not afford a private kitchen, often inhabitants of insulae, sometimes leading them to be scorned by the upper class.

The Thermopolium of Regio V (our paper model) 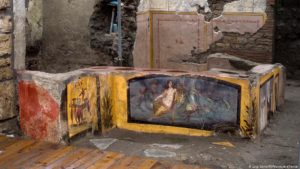 Another Pompeiian thermopolium, containing eight dolia, was completely unearthed in 2020. In addition to frescoes reflecting foods available, one fresco depicts a dog with a collar on a leash, possibly a reminder for customers to leash their pets. The complete skeleton of an “extremely small” adult dog was also discovered that “attest to selective breeding in the Roman epoch to obtain this result.”[6] Archaeologists also revealed about 2,000-year-old foods available in some of the deep terra cotta jars, drink shop, a decorated bronze drinking bowl known as a patera, wine flasks, amphora, ceramic jars used for cooking stews and soups. (All notes from Wikipedia).