The Aviatik (Berg) D.I, was a single-engine, single-seater biplane fighter that was developed and manufactured by the Austro-Hungarian branch of German aircraft company Aviatik. It was also known as Berg D.I or the Berg Fighter, because it was designed by Dipl. Ing. Julius von Berg, and to distinguish it from the D.I fighter built by the parent Aviatik firm in Germany. 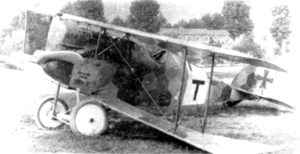 The pilot sat within a high-mounted central position, providing him with a high level of visibility both below and above the upper wing; to enable this seating position, the design featured an uncommonly high decking, which was faired to offer minimal resistance where possible. The D.I was fitted with various armaments. It was initially armed with a single Schwarzlose machine gun, which was mounted onto braces set into the upper fuselage; this arrangement was clear of the propeller blades yet still allowed for easy in-flight access to the breach mechanism. Ammunition was stored in a drum within the fuselage decking and belt-fed to the gun via a purpose-built conduit.

In many respects, the D.I was allegedly proved to have been good combat aircraft amongst its contemporaries. It was a reasonably fast aircraft, possessing excellent flying characteristics and maneuverability, and could reach higher altitudes than most of its adversaries. In addition, the D.I was provided with a roomy and comfortable cockpit which gave a good field of view.(Text from Wikipedia)

On the 23rd June 1918 Italian pilots forced this Berg No.138/43 (our paper model), to land behind Allied lines on the Piave front (photo from Profile publicationsNo.151).