Royal Mail Coach Service – In its day the mail coach was the aristocrat of the road, and all other traffic had to give way to the King’s mail. Dozens of routes covered the country, providing a service, which was the envy of the world. Yet this brilliant epoch was a brief one – the coaches were introduced 1n 1784, and by the 1840s the main routes had been transferred to the railways. Hundreds of the vehicles were built, to a standard Post Office specification, yet only a handful have survived. I have drawn the example in the Science Museum, probably built in 1827 by Vidler of Millbank, who had the exclusive contract for many years. It is designated for the London to York route, and painted in the usual livery of maroon and black, with ‘Post Office Red’ wheels and undercarriage. 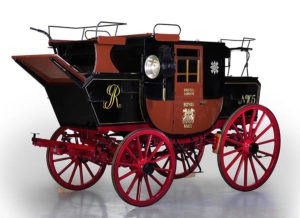 Royal Mail Coach – our paper model is a characteristic Waude coach, low-hung, and built with straight sides, instead of the bowed-out type common to the products of Vidler’s factory. It wears, in consequence, a more elegant appearance than most coaches of that time; but it must be confessed that what it gained in the eyes of passers-by it must have lost in the estimation of the insides, for the interior is not a little cramped by those straight sides. The guard’s seat on the “dickey”—or what in earlier times was more generally known as the “backgammon-board”—remains, but his sheepskin or tiger-skin covering, to protect his legs from the cold, is gone. The trapdoor into the hind boot can be seen. Through this the mails were thrust, and the guard sat the journey with his feet on it. Immediately in front of him were the spare bars, while above, in the still-remaining case, reposed the indispensable blunderbuss. The original lamps, in their reversible cases, remain. There were four of them—one on either fore quarter, and one on either side of the fore boot, while a smaller one hung from beneath the footboard, just above the wheelers. The guard had a small hand-lamp of his own to aid him in sorting his small parcels. The door-panels have apparently been repainted since the old days, for, although they still keep the maroon colour characteristic of the mail-coaches, the Royal arms are gone, and in their stead appears the script monogram, in gold, “V.R.”