The Ansaldo SVA (named for Savoia-Verduzio-Ansaldo) was a family of Italian reconnaissance biplane aircraft of World War I and the decade after. Originally conceived as a fighter, the SVA was found inadequate for that role. Nevertheless, its impressive speed, range and operational ceiling, with its top speed making it one of the fastest of all Allied combat aircraft in World War I, gave it the right properties to be an excellent reconnaissance aircraft and even light bomber. Production of the aircraft continued well after the war, the final examples were delivered during 1918. 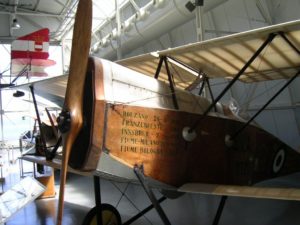 The SVA was a conventionally laid-out unequal-span biplane – however, it was unusual in featuring Warren Truss-style struts joining its two wings, and therefore having no transverse (spanwise) bracing wires. The plywood-skinned fuselage had the typical Ansaldo triangular rear cross-section behind the cockpit, transitioning to a rectangular cross section going forwards through the rear cockpit area, with a full rectangular cross section forward of the cockpit.[1] Two minor variants were produced, one with reconnaissance cameras, the other without cameras but extra fuel tanks.

Perhaps the most audacious operation involving the SVA was conducted over the skies of Vienna, the capital of the Austria-Hungarian Empire, an act which effectively demonstrated the superiority of Italy over its opponent and its inability to prevent such flights from reaching into the heartland of the nation.[10] On 9 August 1918, a flight of seven SVAs of the 87th Squadriglia La Serenissima, based in San Pelagio, flew over Vienna and dropped thousands of propaganda leaflets, which had been specially prepared by the poet, soldier, and nationalist Gabriele D’Annunzio. D’Annunzio himself participated in the flight as an observer on an SVA.9.; 11 SVAs were involved in all.