Was founded in 1953 as The First Accessory Factory and was renamed to Beijing Automobile Works in 1958. In 1987 the company merged with Beijing Motorcycle Company to become the Automobile and Motorcycle United Company (BAM). 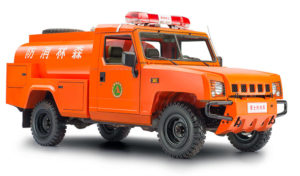 Most fire departments (fire brigades) are provincial agencies (e.g. General Fire Brigade of Guangdong) in China, with exceptions in Beijing, Hong Kong and Macau which have their own separate publicly run fire services. Airports in China (including Hong Kong and Macau) also have their own departments. The majority of Chinese firefighters, since 2018, serve as part of the civilianized formations under the Ministry of Emergency Management under the State Council (formerly as paramilitary personnel of the People’s Armed Police).

(All text from wiki).