These chariot is a parade wagon dated to the 6th century B.C. and made in Etruria (Italy). Built in bronze, iron, leather and walnut, the cart is embossed decorated with ivory inlays. It depicts themes of Homeric mythology, with Achilles in apotheosis together with the goddess Teti. Achilles is depicted with the classic bearded profile, long hair and curls that fall on the shoulders and a short chiton rich in decorations. The goddess instead has a long chiton and is covered by a cape. The two characters are separated by a two-sided shield with Corinthian helmet and ram protome, two birds of prey flying over a killed fawn. The rudder of the chariot has a wild boar protome, while the term has a bird’s head. The yoke for attacking the horses has two handles that end with snake heads, while the hub ends with a lion’s head. 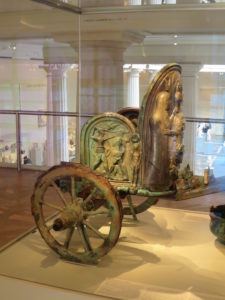 One fine day in February 1902, while building a new farmhouse on his land near Monteleone di Spoleto, Italy, Isidoro Vannozzi happened upon a burial mound covering a subterranean tomb.

Venturing inside, Vannozzi and his son found a human male skeleton in the burial chamber, as well as a ramshackle mess of corroded bronze and iron objects, the largest of which turned out to be a dilapidated bronze parade chariot. Two additional skeletons, a man and a woman, were discovered in an adjoining tomb with additional bronze grave goods nearby.

Today, the spectacularly restored Etruscan bronze chariot from the 6th century BCE found on Vannozzi’s property ranks among the premier archaeological finds in the world. Depicting scenes from the life of Achilles, the chariot proudly displays Thetis’ presentation of the divine armor created by Hephaistos, with a stunning Shield of Achilles occupying the center stage.

In 1902, however, the hapless Vannozzi was less than impressed with the rusting pile of junk in the front yard of his new building. Calling for two men and a truck (more likely an oxcart?), he sold all of it for the price of scrap iron and used the sale price of 950 Lire (equivalent to about $6,000) to buy roofing tiles for the new family farmhouse.

From the hands of the junk dealer, the decayed and damaged parade chariot swiftly ascended the ranks of more knowledgeable Italian buyers and antique dealers. Emerging onto the Paris art market in 1903, the bronze chariot from pre-Roman times was purchased by General Luigi Palma di Cesnola, the founding director of the Metropolitan Museum of Art.