M.A.G.-Fokker D VII – The D.VII was such a formidable aircraft that the Armistice ending WWI specifically called for all surviving D.VIIs be delivered to the Allies. The United States pick up a few for testing, but nothing ever came of the effort. However, other countries used them operationally. One country, the Hungarian Soviet Republic (1) used a number of D.VIIs in the Hungarian/Romanian War of 1919 (2). Some of these aircraft were ex-German aircraft and some were built by Hungarian 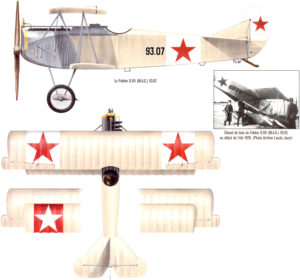 MAG (Magyar Általános Gépgyár) an Austro-Hungarian company licensed to build the D.VII using the Austro-Daimler engines (distinctive radiator is only difference). It was from early 1919 to July 1919 that the Hungarian Soviet Republic used their D.VIIs emblazoned with the red star as seen on our paper model (3).