Myanmar – Myanmar (once known as Burma) has been under a socialist military dictatorship for decades, just been opening up little by little in the last few years. 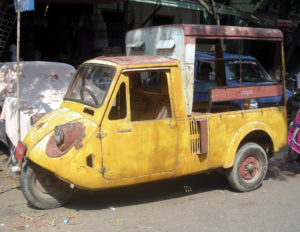 The economic policies imposed by the country’s rulers have resulted on widespread nationalisation and isolation, and overall economic disaster, so much so that Burma is considered one of the “Least Developed Countries” by United Nations.

All that isolation, economic failure, and the lack of either a proper national industry or a buying market for cars, has preserved the WWII Chevrolet trucks/buses transformed, and other old vehicles like lots of Mazda three wheels.

Mandalay was the former capital of Northern Myanmar.  It is located on the Irrawaddy River.

Mazda K360 – Auto rickshaws are a common means of public transportation in many countries in the world. 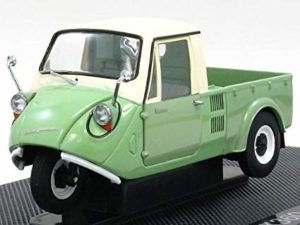 Also known as a three-wheeler, Samosa, tempo, tuk-tuk, trishaw, autorick, bajaj, rick, tricycle, mototaxi, baby taxi or lapa in popular parlance, an auto rickshaw is a usually three-wheeled cabin cycle for private use and as a vehicle for hire. It is a motorized version of the traditional pulled rickshaw or cycle rickshaw.

The Mazda K360 is a three-wheeled mini truck (K-car in Japan) made by Mazda. It first went on sale in 1959 to 1971 in Japan. These little truck were the result of a extensive development work: independent dual brake system, steering wheel instead of handlebar and a spacious driver’s cabin. Production: 280.000 – Motor: Mazda 2-cyl/4 stroke 356 cc. – Power 11hp – Lenght 9 ft. 9 inch.