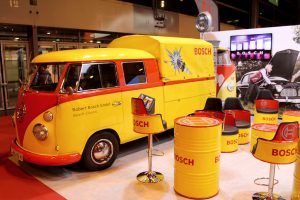 Classics are a passion embodied by steel and chrome. Bosch Classic maintains a fleet of classics in honor of this passion. In this fleet, you can find the Goliath GD 750, Borgward Isabella, VW T1 Double Cab (our Paper model) and Volvo P 1800 E. They are all regular stars at various rallies like the Bosch Boxberg Klassik.

This VW bus, known colloquially among Germans as the Bulli, was licensed for the first time on April 30, 1965 in Karlsruhe with the official designation KA PW 67. The car later found a new home in the United States, was rediscovered 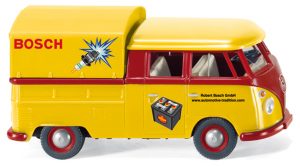 in 2007, and then returned to its homeland. In early 2008, it was completely restored back into its original condition. As a historical Bosch Service transporter, it makes regular appearances at public functions, especially at classics rallies and exhibitions. Since our Bulli was on the road almost nonstop, a freshly restored twin appeared in 2013 to give it an occasional rest.