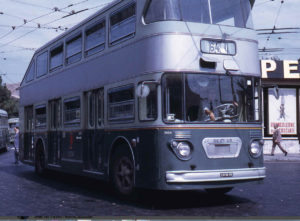 Aerfer was established on 1955 as a company that grouped the activities of the Campania aeronautical pole, being the direct heir of the Southern Railway Workshops (OFM) and IMAM. In 1969 Aerfer merged with the aeronautical section of FIAT to give life to Aeritalia, while the Pozzuoli plants, which produced railway rolling stock, took the name Sofer. The Aerfer production line also included buses and trolleybuses, built from the studies of the Road Vehicles Technical Office (UTVeS), railway rolling stock and cabins for Alfa Romeo Mille trucks. The VE 111 Metropol was built on the basis of the experience acquired in the aeronautical field, with the self-supporting structure of the stiffened shell case (completely in light alloy, as well as the windows, doors and all the sheets). The engine is a sole type placed transversely on the rear overhang, the mixed leaf spring suspensions and the semi-low floor at 40 centimeters from the ground. Tested in 1960, the vehicle was presented in 1961, and then began a demonstration tour all over Italy. 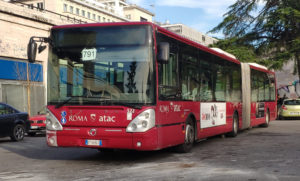 The Citelis was presented in 2005, as part of the renewal of the range proposed by the Italian-French manufacturer Irisbus, replacing both the Renault Agorà, in production since 1996 by Renault Trucks, and the Iveco CityClass, also in production since 1996.Stylistically derived from the Agora, it has some differences such as the shape of the front and rear lights, shaped like circular gems, the bonnet moldings and the front windshield. The Citelis was produced in four differently powered versions: diesel, compressed natural gas (CNG), hybrid and trolleybus version (Irisbus Skoda 24Tr). The engine, in the diesel and compressed natural gas versions, is an Iveco Cursor 8 with six cylinders in line with a displacement of 7.79 l and maximum power of 245, 290 or 380 HP for the diesel versions and 245, 290 or 330 HP for CNG versions.  The hybrid version, on the other hand, is equipped with the Iveco Tector 6 with a displacement of 5.9 l and a power of 300 HP. In all versions the engine is mounted transversely in the rear compartment of the vehicle. The “Line” version, however, aimed mainly at the French market, has the engine placed longitudinally. Both are combined with the Voith DIWA 5 four-speed automatic transmission. At its launch, the engine complied with the European standard on polluting emissions Euro 4, reaching Euro 5 starting from 2006 with the launch of the EEV (Enhanced Environmentally-friendly Vehicle) version. (All notes from wiki)