The Conestoga wagon is a specific design of heavy covered wagon that was used extensively during the late eighteenth century, and the nineteenth century, in the eastern United States and Canada. It was large enough to transport loads up to 6 tons, and was drawn by horses, mules, or oxen. It was designed to help keep its contents from moving about when in motion and to aid it in crossing rivers and streams, though it sometimes leaked unless caulked. 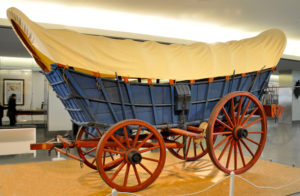 Most covered wagons used in the westward expansion of the United States were not Conestoga wagons but rather ordinary farm wagons fitted with canvas covers, as true Conestoga wagons were too heavy for the prairies.

Note the severe angles at either end and the curved center, characteristics of the large Conestoga compared to other varieties of covered wagon.

In colonial times the Conestoga wagon was popular for migration southward through the Great Appalachian Valley along the Great Wagon Road. After the American Revolution it was used to open up commerce to Pittsburgh and Ohio. In 1820 rates charged were roughly one dollar per 100 pounds per 100 miles, with speeds about 15 mi (24 km) per day.

A Conestoga-style covered wagon on display at the Cole Land Transportation Museum in Bangor, Maine

The Conestoga wagon was built with its floor curved upward to prevent the contents from tipping and shifting. Including its tongue, the average Conestoga wagon was 18 feet (5.4 m) long, 11 feet (3.3 m) high, and 4 feet (1.2 m) in width. It could carry up to 12,000 pounds (5,400 kg)[7] of cargo. The seams in the body of the wagon were caulked with tar to protect them from leaking while crossing rivers. Also for protection against bad weather, a tough white canvas cover was stretched across the wagon. The frame and suspension were made of wood, and the wheels were often iron rimmed for greater durability. Water barrels were built on the side of the wagon, toolboxes held tools needed for repair, and a feed box on the back of the wagon was used to feed the horses.

For pulling the heavy freight wagons the Conestoga horse, a special breed of medium to heavy draft horses, was developed. The Conestoga was never an established breed, and they could be of several different colors. The beginnings were from the same Conestoga Valley as the wagon being Lancaster County. The horses were not bred by any scientific method, but by necessity.

The demise of the Conestoga was predicted in 1864, relegated to oblivion by modern inventions and recent innovations.