Concord coaches are horse-drawn coaches, designed and intended for use as stagecoaches, which employ a style of suspension and construction particularly suited to North America’s early 19th century roads. Leather thoroughbraces suspend passengers who are in constant motion while the coach is moving. 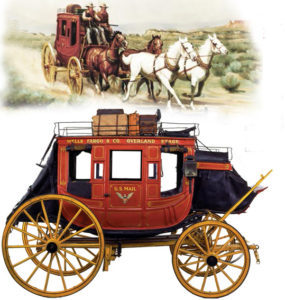 The swaying is accepted by passengers for the shock absorbing action of the leather straps and for the way the special motion eases the coach over very rough patches of roadway. The coaches were first developed and built by coachbuilder J Stephen Abbot and wheelwright Lewis Downing of Concord, New Hampshire. They were high-end, expensive vehicles; the cost was justified by long service life. The thoroughbrace suspension reduced stresses on the structure and improved passenger comfort.

Abbot and Downing’s Concord design replaced European designs which had short useful lives under punishing North American conditions. They were exported to Australia and South Africa.

Railroads began replacing stagecoaches in the middle of the 19th century, but Concord coaches remained in commercial use into the 20th century and continue to be used in parades and for publicity purposes by Wells Fargo Bank.

The undercarriage supports the leather thorough braces  carrying the body. The two axles are tied together by a firm undercarriage braced by three straight perches (lengthwise frame members) and given a relatively slim transom (the transverse members at either end of the perches).

Each end of each transom holds an upright metal standard from which hang the leather thoroughbraces.

The back wheels have brake blocks acting on the iron tires. The driver controls them with a foot lever to his right at the side of his footboard.

The leading horses are known as the lead horses. The wheel horses or wheelers are the back pair nearest the coach’s wheels. The number of horses, usually four or six, could be even more. Two horses alone would very soon tire.

There are three bench seats accommodating up to nine people though models to seat six and twelve passengers were available. The benches at the front and back of the body have limited headroom. Passengers on the center bench are given no backrest but steady themselves with a broad leather harness suspended across the coach by straps from the roof.

Another six passengers can travel in the open air on the body’s roof. There is an external luggage compartment or boot at the back of the body and another boot for valuables below the driver’s seat at the front.

Windows are glazed, but in the 19th century the glass did not withstand hard overland mail trails of the western United States.