The Fokker D.VI was a German fighter aircraft built in limited numbers at the end of World War I. The D.VI served in the German and Austro-Hungarian air services. 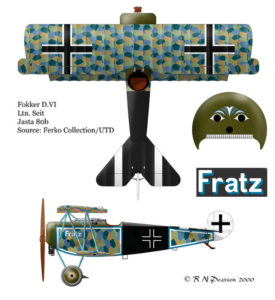 In late 1917, Fokker-Flugzeugwerke built two small biplane prototypes designated V.13. These aircraft combined a set of scaled-down D.VII wings with a fuselage and empennage closely mirroring those of the earlier Dr.I. The first prototype utilized an 82 kW (110 hp) Oberursel Ur.II rotary engine, while the second featured a 119 kW (160 hp) Siemens-Halske Sh.III bi-rotary engine. Fokker submitted both prototypes at the Adlershof fighter trials in late January 1918. At that time, Fokker reengined the first prototype with the 108 kW (145 hp) Oberursel Ur.III. Pilots found the V.13s to be maneuverable and easy to fly. Idflieg issued a production contract after the V.13s were ultimately judged to be the best rotary powered entries of the competition.

The new aircraft, designated D.VI, passed its Typenprüfung (official type test) on 15 March 1918. The production aircraft utilized the Oberursel Ur.II, which was the only readily available German rotary engine. Idflieg authorized low level production pending availability of the more powerful Goebel Goe.III. Deliveries commenced in April and ceased in August, after only 59 aircraft had been completed.[6] Seven aircraft were delivered to the Austro-Hungarian Air Service (Luftfahrtruppen). 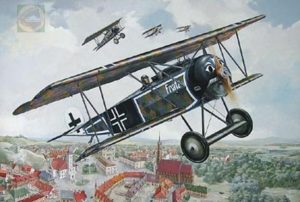 In service, the D.VI was hampered by the low power of the Oberursel Ur.II. Moreover, the lack of castor oil and the poor quality of “Voltol,” an ersatz lubricant, severely reduced engine life and reliability. The D.VI remained in frontline service until September 1918, and continued to serve in training and home defense units until the Armistice. (All notes from Wikipedia)