M113 – The M113 is a fully tracked armored personnel carrier (APC) that was developed by Food Machinery Corp (FMC). The vehicle was first fielded by the United States Army’s mechanized infantry units in Vietnam in April 1962. The M113 was the most widely used armored vehicle of the U.S. 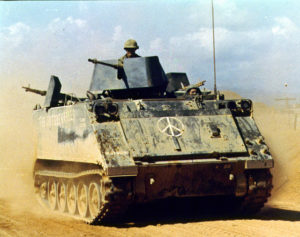 Army in the Vietnam War, earning the nickname ‘Green Dragon’ by the Viet Cong as it was used to break through heavy thickets in the midst of the jungle to attack and overrun enemy positions. It was largely known as an “APC” or an “ACAV”  by the allied forces. The M113 introduced new aluminum armor that made the vehicle much lighter than earlier vehicles; it was thick enough to protect the crew and passengers against small arms fire but light enough that the vehicle was air transportable and moderately amphibious. In the U.S. Army, the M113 series have long been replaced as front-line combat vehicles by the M2 and M3 Bradleys, but large numbers are still used in support roles such as armored ambulance, mortar carrier, engineer vehicle, and command vehicle. The U.S. Army’s heavy brigade combat teams are equipped with approximately 6,000 M113s and 4,000 Bradleys. 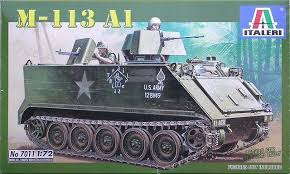 M113 ACAV (Armored Cavalry Assault Vehicle) – The Vietnam-era M113 ACAV (Armored Cavalry Assault Vehicle) version is a very important chapter in the long and proud history of the M113. Following lessons learned, in particular the loss of 14 ARVN .50 cal gunners at the Battle of Ap Bac in January 1963, the standard M113 was upgraded both in armament and armour protection to the M-113.

Two M60 GPMG’s were mounted, one either side of the rear hatch, and fitted with protective gun shields. An FMC-designed armoured gun shield/turret combination was also added to the commanders cupola to afford him protection when manning the .50 cal machine gun. This vehicle was designated the M-113 Armored Cavalry vehicle (ACAV).