Patrol Boat, Riverine, or PBR, is the United States Navy designation for a small rigid-hulled patrol boat used in the Vietnam War from March 1966 until 1975. They were deployed in a force that grew to 250 boats, the most common craft in the River Patrol Force, Task Force 116, and were used to stop and search river traffic in areas such as the Mekong Delta. 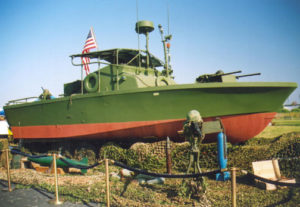 The PBR was a versatile boat with a fiberglass hull and water jet drive which enabled it to operate in shallow, weed-choked rivers. It drew only 2 feet (0.61 m) of water fully loaded. The drives could be pivoted to reverse direction, turn the boat in its own length, or come to a stop from full speed in a few boat lengths.

The PBR was usually manned by a four-man crew. Typically, a First Class Petty Officer served as boat captain, with a gunner’s mate, an engineman and a seaman on board. Each crewman was cross-trained in each other’s jobs in the event one became unable to carry out his duties. Generally, PBRs operated in pairs under the command of a patrol officer who rode on one of the boats.