Land Rover entered production in 1948 with what has later been termed the Series I. This was launched at the Amsterdam Motor Show. It was designed for farm and light industrial use, with a steel box-section chassis and an aluminium body.Originally the Land Rover was a single model offering, which from 1948 until 1951 used an 80-inch (2.03 m) wheelbase and a 1.6-litre petrol engine producing around 50 bhp (37 kW; 51 PS). The four-speed gearbox from the Rover P3 was used, with a new two-speed transfer box. This incorporated an unusual four-wheel-drive system, with a freewheel unit (as used on several Rover cars of the time). This disengaged the front axle from the manual transmission on the overrun, allowing a form of non- permanent 4WD. A ring-pull mechanism in the driver’s footwell allowed the freewheel to be locked to provide more traditional 4WD. This was a basic vehicle: tops for the doors and a roof (canvas or metal) were optional extras. In 1950, the lights moved from a position behind the grille to protruding through the grille.In 1952 and 1953, a larger 2.0-litre petrol engine was fitted. This engine has Siamese bores, meaning that there are no water passages for cooling between the cylinders. During 1950, the unusual semi-permanent 4WD system was replaced with a more conventional setup, with drive to the front axle being taken through a simple dog clutch. Around this time the Land Rover’s legal 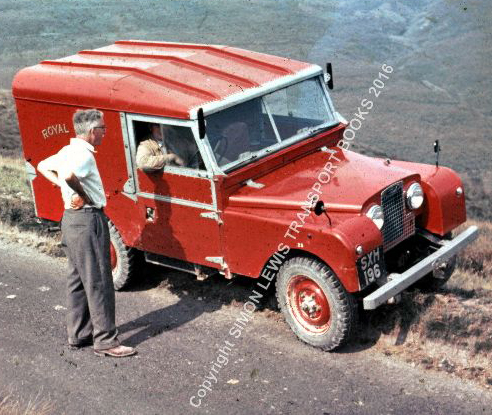 status was also clarified. As mentioned above, the Land Rover was originally classed as a commercial vehicle, meaning it was free from purchase tax. However, this also meant it was limited to a speed of 30 mph (48 km/h) on British roads. After an appeal to the Law Lords after an owner was charged with exceeding this limit, the Land Rover was classified as a “multi-purpose vehicle” which was only to be classed as a commercial vehicle if used for commercial purposes.Series I 86 inch Hard Top. Showing double-skinned ‘”Safari Roof”.The 1954 model year brought major changes. The 80-inch (2.03 m) wheelbase model was replaced by an 86-inch (2.18 m) wheelbase model, and a 107-inch (2.72 m) wheelbase “pick up” version was introduced. The extra wheelbase was added behind the cab area to provide additional load space. In mid-1954 the “spread bore” petrol engine was introduced (from engines 5710xxxx), allowing better cooling between the cylinders. This had been introduced in the Rover car the year before.[2] The engine was modified again in 1955 (from engine 1706xxxxx), sometimes known as the ‘later’ spread bore.September 1955[3] saw the introduction of the first five-door model, on the 107-inch chassis known as the “station wagon” with seating for up to ten people. The 86-inch station wagon was a three-door, seven-seater. The new station wagons were very different from the previous Tickford model, being built with simple metal panels and bolt-together construction instead of the complex wooden structure of the older Station Wagon. They were intended to be used both as commercial vehicles as people-carriers for transporting workmen to remote locations, as well as by private users.